So, today was probably one of the best "days of our lives" moments, as Marcela and I call them.  A little backstory - Meerle (my town now) only has like two buses that go through the bus stop near us, and between them there's only a total of like 10 buses the entire day.  Also, I have never seen a bus in the city besides the one I ride to school.

So, it started as a normal day.  I got up, went to the bus stop alone (Marcela was sick), and got on the bus.  I swear it was my bus, considering the usual people were on it.  The first half hour or so was normal - we went through the usual cities, and went to the school where almost everyone gets off, except for a few people.  It's fine, that's normal.

After that stop, there's about 10 or 15 minutes, and then a really bumpy road that always throws you around in your seat.  So, like usual, I shut my eyes for like ten minutes, and then the road would wake me up.  After like 10 minutes, I didn't feel the road, so I looked outside.  I had no idea where I was.  It was basically the middle of nowhere, so I wasn't going to get off the bus and try to get a bus back to Meerle, seeing as how the bus stops only had one bus going through it (apparently the one I was on), but I didn't recognize the number.  No problem, it was probably going to the train station, because that's where the ONLY OTHER BUS that goes through Meerle goes.

Nope.  Never passed a train station.  So, fast forward, TWO HOURS after I got on the bus, I finally get let off in Antwerp.  I don't even know how that could happen.  Then, the bus from Antwerp to Turnhout was about an hour, so I didn't get to the Dutch school until after 11.  So that was funny.  Luckily I called one of the ladies in the class to have her tell the teacher, so the teacher was waiting for me with my final grade from the class.  Registered Marcela and I for the next level of classes, then went to normal school.  Just had one class, a period in the library, and then I had like an hour to wait until the bus home.

As soon as I got home, I had to pack my bag for the weekend, and then like 5 minutes later we were out the door to go out to eat in Gent for Frederik's birthday.  Both of their kids and their partners were there, and it was a lot of fun.  A great Greek restaurant.  Then we went around the city and looked at the light show which was AMAZING. 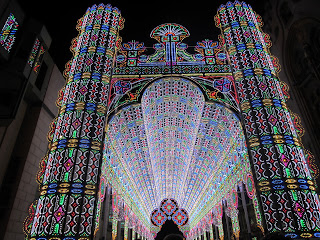 Afterwards, Marcela, Frederik, and Denise went home, and I went to sleep at Raf (their son's) house.  Talked a little bit, and went to sleep.
Posted by Kelsey at 11:47