So, woke up at like 630 after very little sleep - turns out Sravya still hadn't packed her carry-on yet :P  So she was scrambling around to do that.  Didn't eat anything because I was too tired.  Since her 3rd family had to work, Sravya's second host dad came to pick us up to bring us to the airport.  Slept a bit in the car, which was much needed.

But the airport was really weird.  When she was in line, Jenna and Lars showed up, with a Monster for me because she's a sweetheart.  We were all chatting and we saw Sravya getting really upset with the lady at the baggage drop, which we thought was because her suitcases were over weight (she could have up to 25kgs per bag, and she had exactly 25kgs per bag).  But no, apparently her ticket was a standby ticket so she had to go through security RIGHT AWAY to claim her seat.  So that was really dumb. 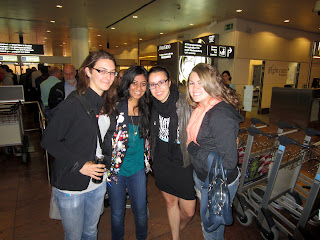 We ended up saying our goodbyes and hugs in the line, and then poof!, she was gone.  Jenna and I knew there was another exchange student leaving, so we walked around until we found her, said to have a good trip, etc etc.  Then, hung out at the arrivals gate because that's what we do to cheer up.  This is where something funny happened.

See, there's a festival going on now (Dour, which I wanted to go to, but I decided it's more important to say my goodbyes than to watch a festival), and one of the bands playing is Against me! (the "!" is part of the name).  And they're a favorite band of Jenna.  And during our arrival gate time, we saw a group of people wheeling huge carts that had drum and other music cases with "Against Me!" written on them.  So Jenna starts freaking out, looking like a complete stalker (staring, walking slowly closer and then scurrying back to where I was, etc), and so I told her she should go up and just say like "Hi, I love you guys and I have your picture in my room", and then walk away, just because it'd complete the creeping she was doing.  She then informed me she does have pictures of them in her room, and I couldn't stop laughing - I actually had to walk away.

I finally just forced her to go talk to them because, as I said, she's leaving in a few days and it's not like they'll remember her if she's a creep.  So she did, and ended up getting their autographs, which was pretty cool.  She was freaking out for sooo long after.  Anyway, we got a train to Antwerp, she stayed with Lars and then I got the bus home, and then basically slept for like 5 hours.

Got up, had some food, and then watched a movie on TV with Senne.  After that, it was an acceptable time to go to bed, so I did just that~
Posted by Kelsey at 11:47